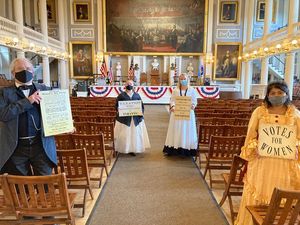 Join rangers from the National Parks of Boston as they celebrate the 1873 Woman’s Tea Party to commemorate the 100th anniversary of Woman’s Suffrage! On December 15, 1873 Boston’s suffragists held a massive suffrage rally in the Great Hall of Faneuil Hall. Leading suffragists, including Lucy Stone, Frederick Douglass, and Mary Livermore, delivered rousing speeches to a crowd of more than three thousand, furthering the suffrage movement in Boston. On August 23rd, 26th, and 28th, the National Parks of Boston rangers need your help to recreate the meeting! Join us virtually on Zoom as rangers in 1873 period dress recreate the historic Woman’s Tea Party.

This is a free program but registration is required, the link for which can be found here: https://masshist.zoom.us/meeting/register/tJMtdOqsqjsvEtXcqp9YrNiSuahw3XVx_EII