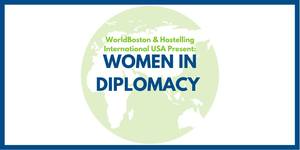 Join WorldBoston and Hostelling International for evening of discussion and networking!

In honor of International Women's Day, join us for this engaging special event. The panel will feature three of Boston's most senior diplomats and their reflections on challenges and opportunities for women in diplomacy. Conversation will continue during networking with light refreshments.

The event is free and open to ALL, but registration is required!

Harriet Cross has been a member of Her Majesty’s Diplomatic Service for over 20 years. Beforecoming to Boston in 2016, she was Deputy Ambassador at the British Embassy in Yemen. In her diplomatic career, Harriet has served at the British Embassy in Morocco and at the UK Mission to the UN in New York. She has also worked in the Foreign and Commonwealth Office in London covering a number of jobs including EU trade relations, and human rights policy.

Nicole Menzenbach took up her post as the Consul General of Germany to New England in August 2018. From 2014-2017, she served at the Federal Ministry of Foreign Affairs in Berlin as the Head of Division for Higher Education, Science and Academic Relations Policy. Nicole began her professional career working as an advisor for Joschka Fischer while he was a Member of Parliament of the Federal Republic of Germany, and then as his Senior Advisor when he was Minister of Foreign Affairs.