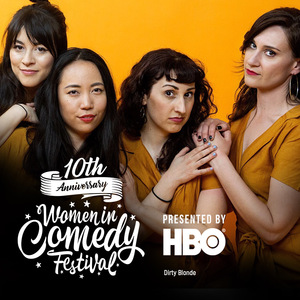 Join the 10th annual Women in Comedy Festival, Presented by HBO, for a curated evening of top Shelf Improv and Sketch Comedy from all over the country. Featuring Dirty Blonde, The Boston Sketch Company, and Herbeaver.

As dirty blonde, four women’s alter egos take stage—as four FIERCELY confident women. They explore what it means to operate with the self-assurance and boldness of the average dude. They give themselves and women everywhere, permission to be louder, take up more space, and support each other in the process. Together with the audience, they answer the question “What makes you feel badass?”

Herbeaver was formed in 2017 by Heather Gallant, Mallory Morgan, and Katie Preston. Over the last year, Herbeaver has busted into the Toronto Comedy Scene, guns-a-blazin’, with their monthly show Bush Party at Toronto’s beloved Comedy Bar. With 45 minutes of new sketches every single month, these ladies know how to keep their audience on their toes.

Last year Herbeaver collaborated with Humber College’s film school to create a series of filmed sketches, as well as a documentary called “Behind The Bush” about their writing and performing experiences. In 2018 the documentary was featured at the Comedy World Network International Film Festival(Las Vegas), The National Screen Institute Short Film Festival, the HerStory Cinephilia Society Film Festival(Nashville), and The Shetown Womens Film Festival (Detroit).