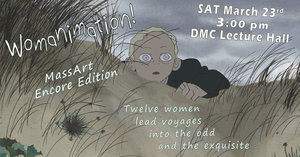 What is Womanimation? As the name implies, it’s a festival showcasing acclaimed animated films created by women from around the world, a celebration of the story-telling power of animation, particularly in the short form.

The tenth edition of Womanimation! comes to Massachusetts College of Art and Design on Saturday March 23rd at 3:00 pm in the Design and Media Center (DMC) Lecture Hall, on 621 Huntington Avenue in Boston. The event is free and open to the MassArt community and the general public.

This year’s program is diverse in its mix of themes, animated styles, and geography, with twelve short films from ten countries on four continents. This edition included seven US or world premieres and clocks in at 83 minutes.

As animation is an imaginative medium, it is no surprise that several films delve into the bizarre: saving house spirits from predators in Count Your Curses, an enthusiastically curious cow in A Chronic Circus, an elaborate seaside funereal ritual in Grandpa Walrus, and gambling forest creatures in Nocturne. Several films explore the cycle of life and aging, including Gelato, a tale of love, youth, and ice cream; Saving Pooh about lost childhood memories, and Tweet-Tweet, imagining life as a tightrope to be carefully walked.

A slideshow introducing the filmmakers will precede the program, and audience members will be given ballots to select their favorite films of the program. DJ Madame B will weave soundscapes created by women across the globe before and after the screening.

Festival organizers from MergingArts Productions, which produces the festival, will be in attendance to introduce the program.

The event is an official SWAN Day event; SWAN Day is an international holiday held in March designed to showcase the power and diversity of women’s creativity.

Reddit
23/03/2019 15:00:00 23/03/2019 17:00:00 America/New_York Womanimation! 10 - MassArt Encore Edition What is Womanimation? As the name implies, it’s a festival showcasing acclaimed animated films created by women from around the world, a celebration of the story-telling power of animation, particu... Massachusetts College of Art and Design, Boston, MA 02115 false DD/MM/YYYY