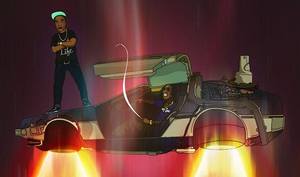 Multi-platinum selling, Grammy and Golden Globe nominated recording artist Wiz Khalifa burst onto the scene with mainstream success with the release of his first major label debut, Rolling Papers‎ in 2011. ‎Rolling Papers spawned the hugely successful hits “Black and Yellow,” “Roll Up” and “No Sleep” and gave Wiz the platform to win the award for Best New Artist at the 2011 BET Awards and Top New Artist at the 2012 Billboard Music Awards. His sophomore studio album, Blacc Hollywood, ‎debuted at #1 on Billboard’s Top 200 album chart and featured the hit single “We Dem Boyz.” Soon after Khalifa’s track,‎ “See You Again,” off the FURIOUS 7 soundtrack, catapulted to the top of the charts across 95 countries. Holding the #1 spot for 12 consecutive weeks, “See You Again” broke records by being Spotify’s most-streamed track in a single day in the United States and in a single week in 26 countries. In addition to winning 3 Teen Choice Awards in 2015, “See You Again” continued its success by winning a Critics’ Choice Award in the category Best Song, winning two Billboard Music Awards in the categories Top Hot 100 Song and Top Rap Song, earning three Grammy Award nominations in the categories Song of the Year, Best Pop Duo/Group Performance and Best Song Written for Visual Media, and a Golden Globe nomination in the category Best Original Song – Motion Picture. Wiz released his album Khalifa in February of 2016 as a thank you to fans which includes the tracks “Bake Sale” featuring Travis Scott, “Zoney” and “Elevated.” On June 3 Wiz released TGOD Mafia Presents: Rude Awakening with his TGOD Mafia collaborator Juicy J. Wiz recently co-headlined The High Road Summer Tour with Snoop Dogg this past July.

New Orleans rapper and Hip-Hop connoisseur Curren$y thrives on making music on his own terms. With his “Jet Life” mantra about living life to the fullest, the savvy rhyme spitter (why do you think they call him “Spitta”?) is focused on a lyrical devotion to the truth and authenticity. It’s because of this ethos that the man born Shante Anthony Franklin has transcended any regional rap stereotypes to become a favorite of bloggers, critics, fans and everyone in between. Now aligned with Atlantic Records., the plan is to let Spitta be himself, but have even more people get acquainted with the Jet (Just Enjoy This Sh*t) Life.

Inspired by a litany of Hip-Hop heavyweights (“You’re putting your voice on top of some shit, you gotta say something.”) including Slick Rick, Snoop Dogg, Camp Lo, DJ Quick, A Tribe Called Quest, OutKast and 8Ball & MJG, by 2002 the young Curren$y took his talents to Master P. Signing a recording deal with No Limit Records, he was a member of the 504 Boyz. Only two years later, he switched over to Cash Money Records, becoming the marquee artist of Lil Wayne’s then fledgling Young Money Records. The experience with the hometown labels taught him not only how to be a team player but about the type of artist he wanted to be.

“I was in other places. The verse before would be about possibly decapitating somebody with a shotgun and boatloads of cocaine,” recalls Curren$y. “So young me was like, so I shot him too and I got two keys out of the ten. Then I would try to sneak in something else about how I got the newest Jordans and this that and third to still be myself.”
Curren$y went for self in late 2007 when he formally left the Young Money fold. An album called Music To Fly To was recorded for the label but never released. After walking away from the Lil Wayne co-sign, Curren$y began releasing mixtapes (Life At 30,000 Feet, Independence Day, et al.) to let fans know his talents didn’t go to waste when he was sitting on the shelf. Off the strength of his mixtapes, Curren$y earned a spot on the 2009 Freshmen cover of XXL Magazine (December 2008 issue), labeling him as one of Hip-Hop’s most promising acts.

Labels began sniffing around for Curren$y’s services around this time, but he preferred to remain independent. “The rap game, I didn’t know the politics of it until I was completely dolo in making the music that I make. I started going to meetings and realizing how the machine was set up.”

Spitta was increasing his music business IQ but was still adamant about not compromising his art. “Any song that an artist gives you, if there’s a world for him out there, it’s going to do what it do,” he says. “It doesn’t have to sound like whatever’s popping on the radio. It has to sound like that artist because that’s what people want.”
The New Orleans native moved to New York City because he felt that the creative energy there would only help him bolster his movement. “It was just smarter for my hustle to be somewhere where everything is right at my fingertips,” he says. “It just so happened that the city was fucking with me. I felt the love the

whole time and I still do. When I got out here to New York, I was able to be with so many people absolutely on the grind. I could shoot a video every day, and they wanted to do it. Once I got all that work done, people [back home] came out of their shells and said I can do this. Now I’m assembling a team in the city of people that are talented and I’m working with them as well.”

To call Curren$y output of music prolific would be an understatement. In 2009 Curren$y released This Ain’t No Mixtape, via Amalgam Digital, and the same year released another album, Jet Files. He also aligned with ex-Roc-a-fella Records head honcho Dame Dash and his new DD172 venture. The result was in 2010, Curren$y would again drop two albums, Pilot Talk and Pilot Talk 2, via Dash’s DD172 label with distribution from Def Jam Record. Throughout this time Spitta was receiving acclaim for his music, and videos, as well as making moves with lifestyle and streetwear brands like Married to the Mob, Diamond supply and Rocksmith. An avid automobile fan and collector, he also has a couple of car clubs (Boxed Sets with Chuck English from rap group the Cool Kids, and Cruise Life in New Orleans with his manager/business partner and long time friend Mousa Hamdan).

Yes, Curren$y is living the good life, but don’t make the mistake of calling him some type of stoner rapper. “When you rapping about weed and kicking it, how pissed off can people be with you. dog?,” he observes. “If that’s really what you doing. Just don’t be a studio chiller. Everybody wants to get on with this fucking weed rap. It’s not weed rap. There’s no stoner rap. It’s not a genre, that’s bullshit. Anybody that’s doing that should be kicked in the balls because that’s some gimmick shit. Four bars ago you were barely smoking, dog, and now you’re smoking a doobie.”

The charismatic Curren$y is living, breathing example of that tried and true quote from from Confucius: “Picking a job you love, you’ll never have to work a day in your life.”
“I hit the ultimate liq. I watch basketball like, ‘Yo, they’re getting paid to play’,” says Curren$y. “This is the equivalent. Yeah, it’s work, but the trade off is pretty G’d up.” Now that’s the Jet Life.