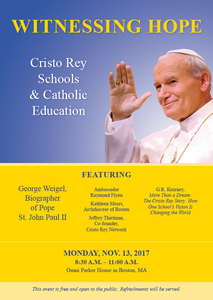 As the country is engaged in a national discussion about equality of educational opportunity, school choice, and religious freedom, join us at a public forum featuring nationally recognized experts on Catholic leadership and schooling, that will highlight a successful model of Catholic high school education. Please RSVP by Nov. 6th to Lauren Corvese at 617-723-2277 ext. 202
or lcorvese@pioneerinstitute.org or by clicking this link: https://events.r20.constantcontact.com/register/eventReg?oeidk=a07eeqb542y9658f1cc&oseq=&c=&ch=

George Weigel is Distinguished Senior Fellow and William E. Simon Chair in Catholic Studies at Washington’s Ethics and Public Policy Center. A Catholic theologian and one of America’s lead¬ing public intellectuals, he is perhaps best known as the author of an international bestseller, the two-volume biography of Pope St. John Paul II, Witness to Hope and The End and the Beginning. Mr. Weigel is the author or editor of more than 20 other books, including the recently published Lessons in Hope: My Unexpected Life with St. John Paul II. His essays, op-ed columns, and re-views appear regularly in major U.S. newspapers. A frequent guest on television and radio, he is also Senior Vatican Analyst for NBC News. His weekly column, “The Catholic Difference,” is syndicated to 85 newspapers and magazines in seven countries. Mr. Weigel is the recipient of 18 honorary doctorates in divinity, philosophy, law, and social science.

Ambassador Raymond Flynn is a former three-term Mayor of Boston, U.S. Ambassador to the Vatican, and the bestselling author of The Accidental Pope and John Paul II, A Personal Portrait of the Pope and the Man.

Kathleen Mears is Superintendent of Catholic Schools for the Archdiocese of Boston. Previously, she was the Executive Director for Elementary Education for the National Catholic Educational Association and Assistant Superintendent of Schools for the Archdiocese of Indianapolis. Kath¬leen began her career as Principal of St. Roch Catholic School in Indianapolis.

Jeff Thielman is the president and CEO of the International Institute of New England (IINE). Pri¬or to joining IINE, he co-founded the national Cristo Rey Network and spent nearly two decades creating schools that serve 11,000 low income and immigrant students in 21 U.S. states and the District of Columbia. Thielman oversaw the start-up of the first 24 Cristo Rey schools and served as President of Cristo Rey Boston High School.

G. R. Kearney is a Partner at Acuity Capital Partners in Chicago and served as its Vice President. He spent four years building a small web development firm and served as a Business Development Manager of Sandbox Industries. Kearney founded, served as a teacher, and coached at a volunteer teaching community at a high school on the South Side of Chicago. He is the author of More Than a Dream: The Cristo Rey Story - How One School’s Vision Is Changing the World. Kearney earned an M.B.A., with honors, at the University of Chicago’s Graduate School of Business and studied English and writing at Georgetown University.