Will Dailey & The All Together Now 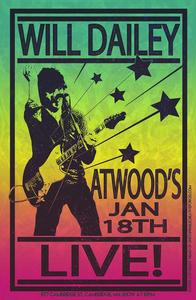 Will Dailey is an acclaimed independent recording and performing artist and artist advocate. His sound has been described as having a rich vintage vibe while having a firm appreciation of AM rock, pop and big hooks leading famed Rock journalist Dan Aquilante to call him the real deal. Dailey's last album, National Throat, has been met with stellar reviews, over 9 million spins on Spotify, top 20 on Billboard Heat Seeker chart and won Album of the Year in the Boston Music Awards, New England Music Awards and Improper Bostonian Magazine.

Most recently in 2016 and 2017 he shared the stage with Eddie Vedder twice in Chicago and in Boston, joining him on stage for the Hot Stove Cool Music Benefit. He has also shared the stage with Willie Nelson, Roger McGuinn, G Love and Tanya Donelly. In June of 2013 he was featured on a Stephen King/John Mellencamp project produced by T Bone Burnett called Ghost Brothers Of Darkland County and, in that same year, also released an original song he wrote inspired by Jack Kerouac's Tristessa.

In September of 2013 he played his fourth Farm Aid Concert along side Neil Young, Willie Nelson, Dave Matthews and John Mellencamp. The songwriter has currently wrapped up a new full length album due out in the spring of 2018. Daileys latest album makes it clear that good songwriting isnt a matter of hiding behind shiny production or an over-stylized persona. His music doesnt contain a note of pretense. If anything, it is committed to the beauty of simplicity. National Throat is a statement about the value of creativity and the survival of art. Dailey believes the truth will find its way out, that what is real and beautiful will rise to the top. - Jon Karr, New York Minute Magazine, May 2015