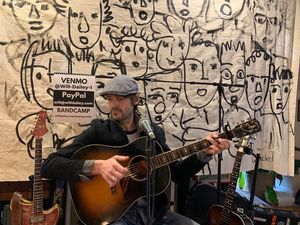 Stop #5 on the Isolation Tour.

This is for the staff at the historic Plough & Stars. This room means a lot to me. I have carved out a lot of my songs and test drove them in this room with the regulars. I'm going to cover some Morphine for this one and some Van Morrison.

My pal Adam M Sherman is going to open up the show at 7:30 on his facebook page: https://www.facebook.com/Adam.Murray.Sherman