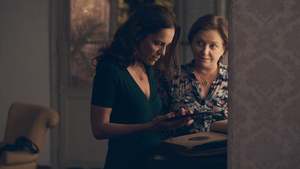 Wicked Queer: Boston's LGBTQ+ Film Festival is back for its 35th anniversary this year, starting with its closing night feature, Paraguayan entry for the 91st Academy Awards The Heiresses.

Directed by Marcelo Martinessi, this Spanish language feature tells the story of Chela and Chiquita. Both descended from wealthy families in Asunción, Paraguay, they have been together for over 30 years. But recently their financial situation has worsened and they begin selling off their inherited possessions. But when their debts lead to Chiquita being imprisoned on fraud charges, Chela is forced to face a new reality. Driving for the first time in years, she begins to provide a local taxi service to a group of elderly wealthy ladies. As Chela settles into her new life, she encounters the much younger Angy, forging a fresh and invigorating new connection. Chela finally begins to break out of her shell and engage with the world, embarking on her own personal, intimate revolution.

To access the full calendar of 2019 screenings, visit www.wickedqueer.org.