Why Race and Money Are the Same Topic 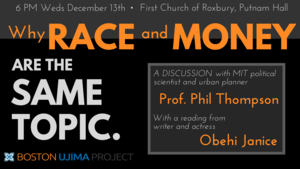 Mark your calendars for the first of a Ujima lecture series exploring the intersections of race and finance. We are excited to kick off the series with a talk from Phil Thompson, "Why Race and Money Are the Same Topic!"

Actress, writer, and comedian Obehi Janice will open the talk with a reading of a scene from an original composition.

The talk will take place, Wednesday, December 13th, 6:00pm, First Church of Roxbury, Putnam Hall. The talk will cover the history of collateral and more!

This talk is free and open to the public. We are accepting donations.

J. Phillip Thompson is Associate Professor of Urban Planning and Politics at MIT. Phil also heads the Health Working Group at the School of Architecture and Planning (and Media Lab) at MIT. Phil’s research focuses on black politics, community development, and political economy.

Outside of campus he works with labor unions, community groups, and local government officials on strategies and policies for economic and social justice.

Phil earned a PhD in Political Science from the City University of New York Graduate Center, a Masters degree in Urban Planning from Hunter College in New York, and a B.A. in Sociology from Harvard University.

Obehi Janice will read a scene from her play Ole White Sugar Daddy.

OBEHI JANICE is an award-winning actress, writer and comedian.

A graduate of Georgetown University, Obehi was named "Boston's Best Actress" by The Improper Bostonian in 2014. She works on stage, screen and as a voice actress in video games, radio, and commercials.

She has garnered esteem and recognition from American Theatre Magazine, Bustle, WBUR, DigBoston, WGBH, For Harriet, and The Boston Globe. She is a proud member of the Dramatists Guild and Actors’ Equity Association.

Obehi is originally from Lowell, Massachusetts.

Why Race and Money Are the Same Topic