Why Did 74 Million People Vote For Trump 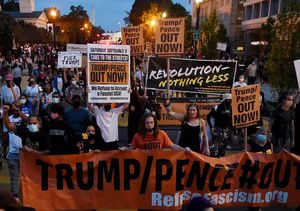 The Situation
More people voted in this election than in any other election in U.S. history, but 74 million of them voted for a fascist incumbent whose regime has advanced a vicious program of white supremacy, misogyny and theocratic patriarchy, and “America First” xenophobia. 74 million people endorsed locking children in cages, throwing immigrants in concentration camps, and backing the most vicious white supremacy, including vigilante racist and anti-Semitic murderers. A political form of Christian fundamentalism makes up the most organized solid base of this fascist movement. The 74 million include millions deeply mired in a world of lies, crazy lunatic conspiracy theories and a vicious anti-science mindset that has already killed a quarter of a million people from COVID, with the pandemic now out of control.

Some Questions
What accounts for this? What are its roots and how deep are they? Is it an historical aberration? Will this movement fade away with Trump out of office, or be further filled with revanchist determination? What is the danger and what do we do about it?

Don't miss an important forum to dig into this and more, with:

Sponsored by RefuseFascism.org and The RNL – Revolution, Nothing Less! – Show

RefuseFascism.org is a movement of people coming from diverse perspectives, united in our recognition that the Trump/Pence Regime poses a catastrophic danger to humanity and the planet, and that it is our responsibility to drive them from power through non-violent protests that grow every day until our demand is met.

The RNL -- Revolution, Nothing Less -- Show is a multidimensional youtube show about making revolution and emancipating humanity. It's about the world and for a radically different world, bringing alive the need for revolution and the new communism developed by the revolutionary leader Bob Avakian.