Where the Salem Witch-Hunt began: Exploring the sites of Salem Village with Historian Dan Gagnon 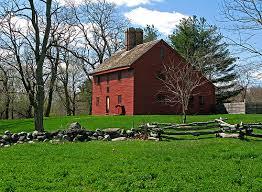 Salem Village - present-day Danvers, MA - was where the 1692 Witch-Hunt first began, and where many of the leading figures of the Witch-Hunt lived. It is where the Devil was allegedly raised, where people claimed to see specters of accused witches hurting them, and where Villagers turned against their neighbors because of the fear that some amongst them were in league with the Devil.

Although Danvers has many significant historical sites related to the witch-hunt and far more still-extant buildings connected to the witch-hunt than Salem Town (present day City of Salem), its witch-hunt history is less promoted and its historic sites less visited. This presentation will discuss these nationally significant historic sites including where the 1692 Witch-Hunt first started, where several accusers and accused lived, and where Salem Villagers gathered to watch those accused of witchcraft questioned by the judges.

Daniel A. Gagnon is a life-long Danvers resident and historian researching the 1692 Salem Village Witch-Hunt. He is the author of a forthcoming biography of 1692 Witch-Hunt victim Rebecca Nurse (Fall 2021), and his article “Skeletons in the Closet: How the Actions of the Salem Witch Trials Victims’ Families in 1692 Affected Later Memorialization” was recently published in the New England Journal of History (Fall 2019). He serves on the board of directors of the Rebecca Nurse Homestead Museum in Danvers, is a member of the Danvers Historical Society, and serves on the Town of Danvers’ Salem Village Historic District Commission. In 2017, he led the successful effort to petition the governor to declare July 19, 2017 as "Rebecca Nurse Day" in the Commonwealth of Massachusetts to commemorate the 325th anniversary of Rebecca Nurse's execution for witchcraft in 1692.