When Particles Collide: Live from Mom and Dad's Basement 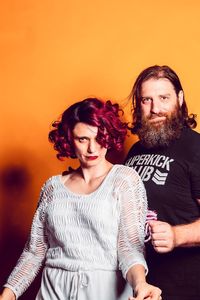 Every Saturday Night for the foreseeable future we're going to Live Stream a concert here on FB.

Trained as a jazz drummer and choral vocalist, Chris met Sasha, a self taught punk rocker and singer-songwriter in the spring of 2010 when they were both cast in a Bangor Maine production of the rock ‘n roll musical Hedwig and the Angry Inch. They have been working together ever since to find where disparate influences come together to create melody forward, hard hitting, genre bending rock ‘n roll. When Particles Collide has built a reputation as a must see band one show at a time touring all over the US and Canada. They are currently a full time, independent touring outfit living out of their 2014 Ram Promaster and rack up over 200 shows per year. Under their own record label, Unstoppable Rock Records they have released eight sets of recordings including three vinyl records (Photoelectric 2014-sold out, Ecotone 2016-currently in the album’s second pressing, and Fade To Gold 2018-Limited edition, hand screened artwork on Side B). Before becoming full time musicians Sasha taught high school chemistry for 18 years and Chris worked in the car business and as a nanny. Sasha and Chris were also married at the theater where they met in June of 2013.

Their songs and live performances are infectious. Sasha and Chris are interested in bending and blending genres and influences to tell stories. Dynamics, rhythmic turn arounds and harmonies are the tools they use to dig deep into a song’s core meaning. They put every ounce of their bodies into their performances and work hard at their crafts both as players and creators of song. Continually humbled by the challenges and rewards of making a life as musicians they are not looking for accolades, but do enjoy a rowdy crowd at a dive bar and an intensely focused audience at an acoustic house concert. And snacks, they love snacks.