What Remains To Be Seen: A Conversation with Howardena Pindell 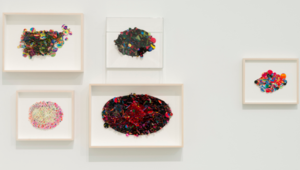 Howardena Pindell: What Remains To Be Seen will open at the Rose on February 1, 2019.

Join us during opening weekend for a conversation with artist Howardena Pindell. Celebrating the final stop of her major touring retrospective, the Rose Art Museum will host Pindell and exhibition co-curators Naomi Beckwith (Marilyn and Larry Fields Curator, Museum of Contemporary Art, Chicago) and Valerie Cassel Oliver (Sydney and Frances Lewis Family Curator of Modern and Contemporary Art, VMFA). They will be joined by Caitlin Rubin, Assistant Curator at the Rose Art Museum.

Naomi Beckwith is the Manilow Senior Curator at the Museum of Contemporary Art Chicago, where her exhibition and book projects focus on the impact of identity and multi-disciplinary practices for shaping contemporary art. Prior to the MCA, Beckwith held positions at the Institute of Contemporary Art in Philadelphia and the Studio Museum in Harlem. Her numerous exhibitions include The Freedom Principle: Experiments in Art and Music, 1965 to Now and 30 Seconds off an Inch, both considering the persistent resonance of black cultural practices across contemporary art internationally. She has been an early champion of such rising artists as Rashid Johnson, Jimmy Robert, Keren Cytter, The Propeller Group, and Lynette Yiadom-Boakye.

Valerie Cassel Oliver is the Sydney and Frances Lewis Family Curator of Modern and Contemporary Art at the Virginia Museum of Fine Arts. Prior to her position at the VMFA, she was Senior Curator at the Contemporary Arts Museum Houston where worked from 2000-2017. She has served as director of the Visiting Artist Program at the School of the Art Institute of Chicago (1995-2000) and a program specialist at the National Endowment for the Arts (1988-1995). In 2000 she was one of six curators selected to organize the Biennial for the Whitney Museum of American Art. Howardena Pindell: What Remains to be Seen marked her debut exhibition at the Virginia Museum of Fine Arts.

About the Artist
Howardena Pindell (b. Philadelphia, 1943) has explored the intersection of art and activism for more than five decades. As an artist, curator, and teacher, she has challenged the staid traditions of the art world and asserted her place in its history, both as a woman and one of African descent. Trained as a painter at Boston University and Yale University, Pindell has used unconventional materials such as glitter, talcum powder, sewing thread, and perfume to expand the boundaries of the rigid tradition of painting practice. The work she has created since 1979, when a car accident left her with short-term amnesia, expands upon this experimental formal language to confront a wide range of subjects, from the personal and diaristic to the social and political.

Pindell's work has been featured in many landmark museum exhibitions and is in the permanent collection of major museums across the globe. The artist, who lives and works in New York City, is a full professor at the State University of New York, Stony Brook, where she has taught since 1979.

Free + open to the public