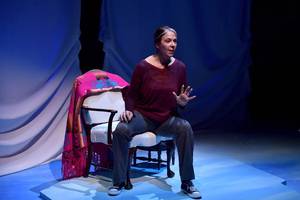 Drama lovers will have the rare opportunity on April 9 to see Huntington Theatre Company’s Mala, a poignant one-woman play that delivers a moving portrait of the ways taking care of family tests, deepens and changes our bonds to the ones we love.

Written and performed by local playwright and performer Melinda Lopez, Mala tells her story of caring for her increasingly frail and ever-fierce mother. Consistently sold out during its Boston run, Mala was taped by WGBH in 2018. It will make its broadcast debut on WGBH 2 and YouTube TV on Thursday, April 9 at 10pm. The play will also be available to stream following the broadcast in the WGBH TV & Streaming section: https://www.wgbh.org/tv

“At the time this was filmed, we were so grateful to the Huntington and to WGBH for their interest in capturing this show during its return to Boston,” said David Dower, artistic director of ArtsEmerson, a collaborator in this effort. “But we had no idea how urgent and moving it would become to have it available to air in the middle of this moment.”

Set during the epic snowfalls of 2015, Mala is inspired by notes that Lopez frantically typed to herself on an iPhone while she cared for her mother. These short missives ultimately became the play, which also stars Lopez.