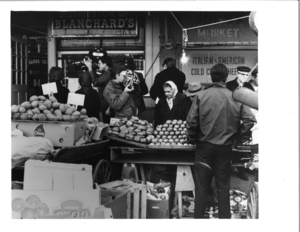 From City Hall’s cascading water fountains to the original Legal Sea Foods of Inman Square, how has Boston changed over the past 50 years?  WGBH invites the public to view scenes from the Boston public broadcaster’s 1969-1970 TV program, Michael Ambrosino’s Show on Tuesday, October 8 at 7pm at Coolidge Corner Theatre. This cinema verité-style series was developed to highlight communities in the Greater Boston area and to encourage local citizens to become more involved with community activities.

The screening will be followed by a panel discussion with original producer and host Michael Ambrosino, Boston City Archaeologist Joseph Bagley and the WGBH David O. Ives Executive Director of Media Library and Archives Karen Cariani.


Attendees will view excerpts from the following episodes of Michael Ambrosino’s Show:

BRING HOME THE BACON, 1969
This program looks at Boston culture through shops and shoppers including Haymarket and Stop & Shop, a grocery chain founded in Somerville, MA.

CITY HALL, 1969
Michael Ambrosino takes viewers on a walk-through Boston’s City Hall Plaza, just prior to its opening. In this screening, a community member reminisces about Scollay Square and audience members call-in to the show with suggestions for how to use the City Hall plaza.

BOSTON HARBOR, 1970
Audiences get a bird’s eye view of Boston, its harbor and islands in 1970. Host Michael Ambrosino takes a deeper dive into the health of Boston’s waterways and what is, or can be, done to lessen the pollution.

DON’T FORGET EAST BOSTON, 1970
Once a close-knit community, East Boston experienced change with the development and expansion of Logan Airport. This program features interviews with residents and land developers.

INMAN SQUARE, 1970
Michael Ambrosino takes a tour around one of Cambridge’s “forgotten squares”, exploring the people and images that make up Inman Square. This program features an interview with George Berkowitz, owner of the Legal Sea Foods and commentary from Inman Square’s people about its history, problems and future.