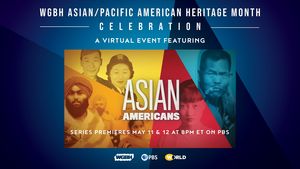 Join us for WGBH’s annual celebration of Asian/Pacific American culture. This year, we will spotlight selections from "Asian Americans," a groundbreaking PBS film series that chronicles the contributions, and challenges of Asian Americans, the fastest growing ethnic group in the United States. The series looks at ways in which the Asian experience illuminates the larger American story and explores the role Asian Americans have played in the evolution of the American identity, in the context of migration, diversity and global connectedness.

Asian Americans is a production of WETA Washington, DC, and the Center for Asian American Media for PBS (CAAM), in association with Independent Television Service (ITVS), Flash Cuts and Tajima-Peña Productions.

The virtual screening and discussion begins at 7pm ET. To register, visit: wgbh.org/apaevent