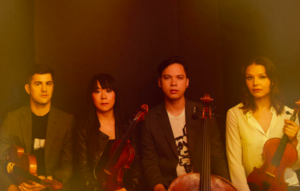 This is one of America's most talented young string quartets. They recently completed an exploration of all of Haydn's 68 string quartets, and play them with dazzling quicksilver changes of style where Haydn signals it in the music (which is to say, all of the time). But they are also adept in music of our own time, and round out this program with two works by Caroline Shaw, the youngest composer ever to win the Pulitzer Prize. Her work Valencia, which had its premiere at a bookstore in Manchester-by-the-Sea, Massachusetts, has become a modern classic. Her Entr'acte was written in response to Haydn's Op. 77 No. 2.