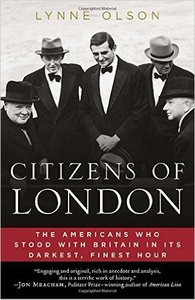 Wednesday Book Group is WFPL's monthly book discussion group for adults. Discussions are informal and generally based on personal reactions, not academic analysis. Free and open to all.
Pick up a copy of this month's title at the Circulation desk 4 weeks before the meeting date.

Citizens of London by Lynne Olson (2011)
The acclaimed author of Troublesome Young Men reveals the behind-the-scenes story of how the United States forged its wartime alliance with Britain, told from the perspective of three key American players in London: Edward R. Murrow, the handsome, chain-smoking head of CBS News in Europe; Averell Harriman, the hard-driving millionaire who ran FDR’s Lend-Lease program in London; and John Gilbert Winant, the shy, idealistic U.S. ambassador to Britain. Each man formed close ties with Winston Churchill—so much so that all became romantically involved with members of the prime minister’s family. Drawing from a variety of primary sources, Lynne Olson skillfully depicts the dramatic personal journeys of these men who, determined to save Britain from Hitler, helped convince a cautious Franklin Roosevelt and reluctant American public to back the British at a critical time. Deeply human, brilliantly researched, and beautifully written, Citizens of London is a new triumph from an author swiftly becoming one of the finest in her field.