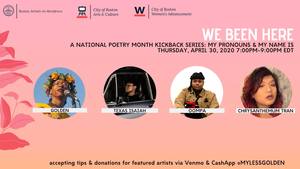 In response to the current COVID-19 pandemic, WE BEEN HERE serves as a virtual artist presentation & Kickback series centering trans and non-binary artists who are engaging with, influenced by, or in conversation with poetry. This series is a way to compensate trans and non-binary artists internationally who have faced deficits in income due to the pandemic, as well as to create a space where we can converse, share our work, and be. WE BEEN HERE, is an ode to non-binary and trans past and futures. Each event will include artist presentations, artist talks, and interpersonal Q& A sessions.

This event will be hosted by Golden, a City of Boston 2020 artist-in-residence. Through the Boston Artists-in-Residence (AIR) program, artists work with a parallel cohort of City partners to explore, critique, and re-imagine City initiatives at the intersection of civil service, social justice, and artistic practice. This year, Golden is working with the Mayor’s Office of Women’s Advancement.

The event will be livestreamed on the Mayor's Office of Arts & Culture Boston Facebook page.

My Pronouns Are My Pronouns, And My Name Is My Name - Featured Artists

Golden (they/them/theirs)
Golden is a black gender-nonconforming trans-femme photographer and poet raised in Hampton, VA, currently residing in Boston, MA. Their work deals with the intersections of blackness and gender within the construct of America. Golden is the recipient of a Pink Door Fellowship (2017/2019), an Isabella Stewart Gardner Museum Luminary Fellowship (2019), the Frontier Award for New Poets (2019), and a Pushcart Nomination (wildness, 2019). Their work has been featured on/at the Shade Journal, the Offing, wildness, Button Poetry, i-D, Interview Magazine, & elsewhere. Golden holds a BFA in Photography from New York University and is currently a City of Boston Artist-in-Residence. @mylesgolden (Instagram) @mylessgolden (Twitter)

Texas Isaiah (He/Him/His/Texas Isaiah/ King)
Texas Isaiah is a visual narrator based in Los Angeles, Oakland, and NYC. The intimate works he creates center the possibilities that can emerge by inviting individuals to participate in the photographic process. He is attempting to shift the power dynamics rooted in photography to display different ways of accessing support in one’s own body. Texas Isaiah’s work has been exhibited in numerous spaces such as Fotografiska (NYC), Aperture Foundation Gallery (NYC), Charlie James Gallery (LA), Studio Museum in Harlem (NYC), Residency (LA), Hammer Museum (LA), and The Kitchen (NYC). His work has been featured in Artforum, The FADER, VSCO, Vice, LALA Magazine, and Cultured Magazine. He is one of the 2018 grant recipients of Art Matters and the 2019 recipient of the Getty Images: Where We Stand Creative Bursary grant. @KingTexas (Instagram) @TexasIsaiah (Twitter)

Oompa (all pronouns are welcome).
Oompa is a Boston-born, recording artist, poet, educator, and 2019 Brother Thomas Fellow who always brings something new to live performance and never leaves home without an interactive and engaging set. She is the winner of the 2019 Live Act of the Year, 2018 Unsigned Artist of the Year award from Boston Music Awards after an unprecedented 12 total nominations, the 2017 Women of the World Poetry Slam, a finalist at the 2016 National Poetry Slam, & has been featured on numerous publications including The Grammy Awards, NPR, Tiny Desk, Huffington Post, Boston Magazine, & NBC 10. @oompoutloud

Name: Chrysanthemum Tran (she/they)
Chrysanthemum Tran is a writer & performer based in Rhode Island. She is a recipient of a 2019 MacColl Johnson Fellowship from the Rhode Island Foundation & a 2020 Artist in Residence at Williams College. With poet Justice Ameer, she debuted the two-woman show ANTHEM, at the American Repertory Theater’s OBERON. Featured on Button Poetry & in The New York Times, she has work published in Them, The Nation, The Offing, The Bettering American Poetry anthology, among others. She is not embarrassed by her taste in pop culture, but maybe she should be. @chrysanthemvm_

Reddit
30/04/2020 19:00:00 30/04/2020 21:00:00 America/New_York WE BEEN HERE Poetry Month Kickback - My Pronouns Are My Pronouns In response to the current COVID-19 pandemic, WE BEEN HERE serves as a virtual artist presentation & Kickback series centering trans and non-binary artists who are engaging with, influenced by, or ... Facebook Live via Mayor's Office of Arts & Culture, Boston, MA false DD/MM/YYYY