WE BEEN HERE - Poetry Kickback Series: For the Youth 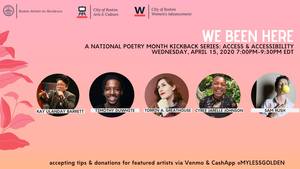 In response to the current COVID-19 pandemic, WE BEEN HERE serves as a virtual artist presentation & Kickback series centering trans and non-binary artists who are engaging with, influenced by, or in conversation with poetry. This series is a way to compensate trans and non-binary artists internationally who have faced deficits in income due to the pandemic, as well as to create a space where we can converse, share our work, and be. WE BEEN HERE, is an ode to non-binary and trans past and futures. Each event will include artist presentations, artist talks, and interpersonal Q& A sessions.
This event will be hosted by Golden, a City of Boston 2020 artist-in-residence. Through the Boston Artists-in-Residence (AIR) program, artists work with a parallel cohort of City partners to explore, critique, and re-imagine City initiatives at the intersection of civil service, social justice, and artistic practice. This year, Golden is working with the Mayor’s Office of Women’s Advancement.

The link to the event will be sent out and posted soon.

For the Youth - Featured Artists

Imani Davis is a queer Black writer from Brooklyn. A Pushcart Prize-nominated poet, they are a recipient of fellowships from The Andrew W. Mellon Foundation, The Lambda Literary Foundation, BOAAT Press, and the Stadler Center for Poetry. Imani’s poetry has appeared with PBS News Hour’s Brief But Spectacular Series, The Offing, The Adroit Journal, Best of the Net, The Rumpus, TEDx, and elsewhere. They are currently earning their B.A. in English and Africana Studies at the University of Pennsylvania. @imanixdavis (Twitter and Instagram)

Black—writer, educator, curator and futurist, Porsha is a native of Chicago who now resides in Boston. Olayiwola uses afro-futurism and surrealism to examine historical and current issues in the Black, woman, and queer diasporas. She is an Individual World Poetry Slam Champion and the artistic director at MassLEAP, a literary youth organization. Olayiwola is an MFA Candidate at Emerson College. Porsha Olayiwola is the author of i shimmer sometimes, too and is the current poet laureate for the City of Boston. @porshaolayiwola (Facebook, Twitter, Instagram).

Rey Spikener is a Black nonbinary femme poet born and raised in Detroit, MI. Her work focuses on rediscovering her voice and youth through her relationships with Black motherhood, gender identity, and the mastery of love as a form of survival. A self-proclaimed hot girl, Rey currently lives in Massachusetts where she is earning her B.A. in English with Creative Writing and carving space for herself in the world. @moondaughterxx (Twitter) @reyspikener (Instagram)

Hari Ziyad is the author of Black Boy Out of Time (Little A, ‘21) and the editor-in-chief of RaceBaitr. Their work has been featured in Gawker, Out, The Guardian, Huffington Post, Ebony, Mic, Paste Magazine, AFROPUNK, in the peer-reviewed academic journal Critical Ethnic Studies, and in the anthology co–edited by Michael Dumas, Ashley Woodson and Carl Grant entitled The Future is Black: Afropessimism, Fugitivity and Radical Hope in Education (upcoming 2018), among other publications. @hariziyad

22/04/2020 19:00:00 22/04/2020 21:30:00 15 WE BEEN HERE - Poetry Kickback Series: On Access & Accessibility In response to the current COVID-19 pandemic, WE BEEN HERE serves as a virtual artist presentation & Kickback series centering trans and non-binary artists who are engaging with, influenced by, or ... Online via Mayor's Office of Arts & Culture Boston, Boston, MA Organizer Organizer e-mail false DD/MM/YYYY Reddit