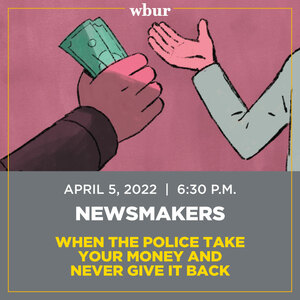 WBUR's investigations team recently exposed how easy it is for police to seize money in a process referred to as civil asset forfeiture. The system allows police and prosecutors to take and keep money and property they suspect is part of a drug crime. Many states have eased their civil forfeiture laws, but in Massachusetts prosecutors are able to keep seized assets using a lower legal bar than in any other state.

Join senior investigative editor-reporter Christine Willmsen and the investigations team as they pull back the curtain on how investigative journalism works — when every word matters and every sentence has consequences. Plus, learn what their investigation into civil forfeitures revealed and what’s happening now on Beacon Hill to address the shortfalls of the system. State Rep. Jay Livingstone, who has proposed reform measures, will join to discuss.

This event is part of a new series called Newsmakers, which showcases exceptional journalism from WBUR