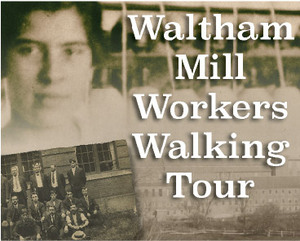 Once again the Charles River Museum of Industry and Innovation and the Waltham Historical Society are teaming up and combining their popular “Bricks and Windows Tour” with the “Mill Workers’ Housing Tour”.

Join us as we walk around and explore the outside of the buildings that once housed the Boston Manufacturing Company (BMC). As you do, you will see the progression though the years from a small company site to a sprawling manufacturing complex.

Then we will visit the nearby early workers' housing used by the individuals who worked at the BMC. This portion of the tour will describe the historical development of the living accommodations of both workers in the mill and their neighbors along River, Jackson, and Central Streets. We will view and discuss some houses from as early as the 1830s that are still on their original foundations, along with others that have been moved and renovated to accommodate changes in use. The latter include the earliest mill-girl boarding houses in the nation, from 1817, and the mansion of Patrick Tracy Jackson, a founder of the BMC and a giant of the American Industrial Revolution.

Presented in conjunction with the Waltham Historical Society.