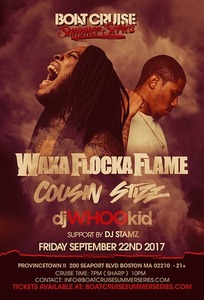 Back by popular demand, trap star Waka Flocka Flame returns to the Boat Cruise on Friday, September 22nd - this time he's bringing along Boston's very own Cousin Stizz to turn up the party!

Disclaimer: Management / security has the right to refuse entry / ALL SALES ARE FINAL / NO REFUNDS.

Artist Biography: Waka Flocka, also known as Waka Flocka Flame, is a Southern rapper associated with Gucci Mane and his So Icey Entertainment enterprise. Born Juaquin Malphurs on May 31, 1986, in Jamaica, Queens, New York, he moved to Riverdale, Georgia, at age nine and later based himself in Atlanta, Georgia, where he launched his rap career. He cites influences that include Eazy-E and Lil Jon in addition to Gucci Mane. He was taken under Gucci Mane's wing, and was added to his Brick Squad collective, which also includes OJ da Juiceman, Frenchie, and Wooh da Kid. Waka Flocka made his solo mixtape debut in 2009 with Salute Me or Shoot Me, the first of numerous mixtape releases that year. Also in 2009 he scored his first commercial hit with "O Let's Do It" and was featured on the song "Bingo" on Gucci Mane's hit album The State vs. Radric Davis. His debut solo effort, Flockaveli, arrived on the Asylum label in 2010 and debuted at number six on the U.S. Billboard 200. A year later the "Round of Applause" single with Drake previewed the rapper's sophomore effort, but when his friend and posse member Slim Dunkin was tragically killed, Waka spent months grieving and away from the studio. As such, Triple F Life: Friends, Fans and Family didn't land until 2012. Guest appearances included Nicki Minaj, Tyler, the Creator, and B.o.B, while production came from the likes of Lex Luger and Southside, along with Troy Taylor, who handled the beats on the album's second single, "I Don't Really Care." The next few years were filled with mixtape releases like From Roaches to Rollies, The Turned Up Godz Tour, and Salute Me or Shoot Me 5, then 2015 saw the MC drop the single "Beast" along with the album Flockaveli 2.