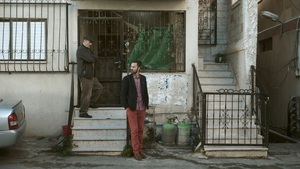 In this rousing family drama from Annemarie Jacir (When I Saw You), the only daughter of a divorced father (Mohammad Bakri) living in Nazareth is getting married. The father’s estranged son (Saleh Bakri) has returned from Rome after years abroad to help his father hand-deliver wedding invitations to each guest, as per local Palestinian custom. As father and son spend the day together, the tense details of their relationship come to a head. Wajib is Palestine’s entry for Best Foreign Language Film in this year’s Oscar race.