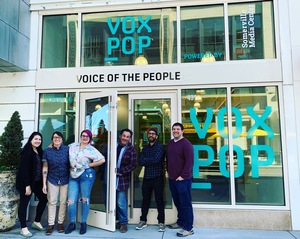 Somerville Media Center announces its debut of VOX POP on May 9th at 6pm at 431 Artisan Way, Assembly Row. VOX POP is a pop up community, media & arts space that is the result of a collaboration between Federal Investment Realty Trust (FRIT) the property developer and manager for Assembly Row and SMC the non-profit community media center based out of Union Square.

What can you expect to see or do there? The goal is to come and find out for yourself! However, as a media center, there will certainly be live cable television productions as well as live podcasting events taking place. SMC will also host for the public some virtual reality demos, author talk series, media education classes, children storytime readings, artist panel discussions, classic movie night screenings and more.

"Think of it as Somerville's version of WBUR's City Space or WGBH's Studio as Boston Public Library," says Brian Zipp, SMC's executive director. In addition to producing media outside of their Union Square studios, this is an opportunity for people to acquaint or re-acquaint themselves with the oldest community media center in the commonwealth.

The activities are not limited just to electronic media. FRIT has provided the space with the expectation that SMC will curate community-facing activities of all types, with SMC leveraging its strong ties to area non-profits, agencies and organizations throughout the community. "We're excited to have Somerville Public Library host Pajama Story Time at Vox Pop this summer," says Erica Jones, SMC Director of Institutional Development. "FRIT has provided a phenomenal opportunity for SMC and its community partners for visibility and outreach in Somerville."

We invite the local press, community members and city officials to join SMC at the VOX POP Grand Opening with a Ribbon Cutting scheduled on Thursday May 9 at 6pm and stick around for a super fun Opening Day Comedy Show at 7pm.

SMC is busy outfitting the space for hosting its grand opening and the myriad of activities for the summer beyond. For more details visit somervillemedia.org/voxpop.