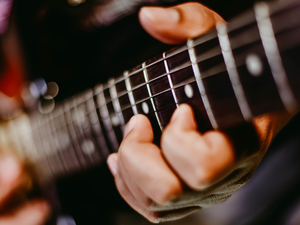 The concert is a journey from a poetic French café and countryside, to the gardens and landscapes of Spain and America. This concert marks the celebration of Larget-Caplan’s recent award from the Société Académique Arts–Sciences–Lettres. It will be a dramatic and intimate event by two splendid artists.

* Written for or arranged by Aaron Larget-Caplan

An intermission of ten minutes will be observed after each performance. Light complimentary refreshments will be available. The event will start no later than 7:10 PM. Thank you for your understanding.

About Matthew Hoch:
Matthew Hoch maintains a multi-faceted musical career as a professional baritone, teacher of singing, choral conductor, lecturer, and scholar. After early training in woodwinds and piano, Dr. Hoch graduated from the Pennsylvania Governor's School for the Arts as a saxophone major before devoting his career to voice performance, pedagogy, and literature. www.matthewhoch.com

About Arron Larget-Caplan
“Aaron Larget-Caplan is a riveting artist,” writes the Washington Post, and the Boston Musical Intelligencer says he has “astounding technical proficiency and artistic delicacy.” Aaron Larget-Caplan is an international recording and touring guitarist, who connects with audiences with Bernstein-esque ease. Aaron has premiered over 80 compositions, many written for him, had his groundbreaking arrangements of John Cage’s music published by Edition Peters and recorded by Stone Records. He also has four critically acclaimed solo discs. Aaron is on faculty at the University of Massachusetts Boston and formerly Boston Conservatory. In June 2019 Aaron received the Médaille D’Etain from the Socièté Académique Arts-Sciences-Lettres of Paris, France for his trailblazing work in music. www.ALCGuitar.com