Virtual: Tobey Pearl with Larry Kerpelman, Terror to the Wicked 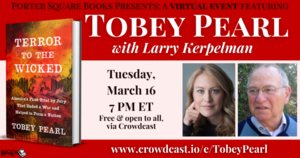 Join Porter Square Books for a virtual talk with local author Tobey Pearl for her debut book, Terror to the Wicked: America's First Trial by Jury That Ended a War and Helped to Form a Nation. This event is free and open to all, hosted on Crowdcast.

A brutal killing, an all-out manhunt, and a riveting account of the first murder trial in U.S. history, set in the 1600s in colonial New England against the backdrop of the Pequot War (between the Pequot tribe and the colonists of Massachusetts Bay): an explosive trial whose outcome changed the course of history, ended a two-year war, and brought about a peace that allowed the colonies to become a full-blown nation.

The year: 1638. The setting: Providence, Plymouth Colony. A young Nipmuc tribesman, returning home from trading beaver pelts, is fatally stabbed in a robbery in the woods near Plymouth Colony by a white runaway servant and fellow rogues. Fighting for his life, the tribesman is able with his final breaths to reveal the details of the attack to Providence's governor, Roger Williams. A frantic manhunt by the fledgling government ensues, followed by the convening of the colony's first murder trial, with Plymouth Colony's governor Thomas Prence presiding as judge. The jury: local settlers (white) whose allegiance seems more likely to be with the accused than with the murdered man (a native) . . .

Piecing together a fascinating narrative through original research and first-rate detective work, Tobey Pearl re-creates in detail this startling, pivotal moment in pre-revolutionary America, as she examines the evolution of our nascent civil liberties and the role of the jury as a safeguard against injustice.

TOBEY PEARL earned degrees in law and international relations from Boston University and studied international law at the University of Hong Kong. She practiced law and taught at Emerson College. She lives in Cambridge, Massachusetts.

Since retiring from a 30-year career with Cambridge-based Abt Associates, where he was Vice President and Director of Corporate Communications, Larry C. Kerpelman has turned to writing about singular moments in American history. He has published several articles in “American History” magazine, the “Boston Globe,” and other publications as well as two memoirs: “Pieces Missing: A Family’s Journey of Recovery from Traumatic Brain Injury” and “Concrete Steps: Coming of Age in a Once-Big City.” A native of Baltimore, he received his undergraduate education at the Johns Hopkins University and earned a Ph.D. in clinical psychology at the University of Rochester.