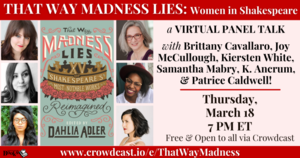 Join Porter Square Books and contributors to new YA anthology That Way Madness Lies: 15 of Shakespeare's Most Notable Works Reimagined for a panel discussion! Contributors Brittany Cavallaro, Joy McCullough, Kiersten White, Samantha Mabry, Kayla Ancrum, and Patrice Caldwell will discuss the role of women in Shakespeare's works - and subsequent retellings! This event is free and open to all, hosted on Crowdcast.

West Side Story. 10 Things I Hate About You. Kiss Me, Kate. Contemporary audiences have always craved reimaginings of Shakespeare’s most beloved works. Now, some of today’s best writers for teens take on the Bard in these 15 whip-smart and original retellings!

Brittany Cavallaro is the New York Times bestselling author of the Charlotte Holmes novels, including A Study in Charlotte, and with Emily Henry, the author of Hello Girls (all HarperCollins/Katherine Tegen Books). Her most recent novel, Muse, was released in early 2021. Her poetry collections Girl-King and Unhistorical were both published by the University of Akron Press. Cavallaro lives with her family in Michigan, where she teaches creative writing at the Interlochen Arts Academy.

Joy McCullough is the author of the YA historical novel Blood Water Paint (long-listed for the National Book Award, finalist for the William C. Morris Award, finalist for the Amelia Walden Award, and winner of the Pacific Northwest Book Award and the Washington State Book Award) and the MG novel A Field Guide to Getting Lost (Junior Library Guild selection). She is also a playwright with a degree in theater from Northwestern University and has Shakespeare’s words etched into her skin. She lives in the Seattle area.

Kiersten White is the New York Times bestselling and Bram Stoker award-winning author of more than a dozen young adult novels, including the And I Darken trilogy, The Dark Descent of Elizabeth Frankenstein, The Camelot Rising trilogy, and the Slayer series. She lives in Southern California with her spouse and three children, none of whom are allowed to read her books.

Samantha Mabry lives and writes in Texas. Her books include A Fierce and Subtle Poison, All the Wind in the World (which was nominated for a National Book Award in 2017), and, most recently, Tigers, Not Daughters.

K. Ancrum is the author of the YA thriller The Wicker King and the YA contemporary The Weight of the Stars. She attended Dominican University to study Fashion Merchandising, but was lured into getting an English degree after spending too many nights experimenting with hard literary criticism and hanging out with unsavory types, like poetry students. Currently, she moonlights as a legal assistant and goblin who skulks about writing in the corner of Starbucks.

Patrice Caldwell is a graduate of Wellesley College and the founder of People of Color in Publishing–a grassroots organization dedicated to supporting, empowering, and uplifting racially and ethnically marginalized members of the book publishing industry. Born and raised in Texas, Patrice was a children’s book editor before becoming a literary agent. She’s been named a Publishers Weekly Star Watch honoree and featured on Bustle’s inaugural “Lit List” as one of ten women changing the book world. Patrice’s debut fantasy novel is out September 2022 from Wednesday Books/Macmillan. She is also the editor of A Phoenix First Must Burn, 16 stories of Black Girl Magic, Resistance, and Hope as well as a YA Paranormal Romance anthology out in Fall 2022. Visit Patrice online at patricecaldwell.com, Twitter @whimsicallyours, and Instagram @whimsicalaquarian.