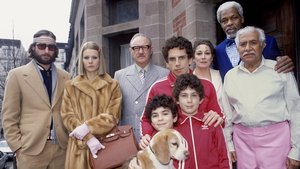 Launching his career from indie darling to one of the most visionary auteurs in the business, The Royal Tenenbaums is peak Anderson, introducing the world to his whimsical symmetry, stylized characters studies, iconic soundtracks, and use of the font Futura. With an ensemble cast led by Gene Hackman, Anjelica Huston, Luke Wilson, Owen Wilson, Gwyneth Paltrow, Ben Stiller, Bill Murray, and Danny Glover, The Royal Tenenbaums is Wes Anderson’s hilarious and heartfelt portrait of family.

Josh Larsen is the co-host of the radio show and podcast Filmspotting , author of Movies Are Prayers , and editor and film critic at Think Christian , a website exploring faith and pop culture. He’s been writing and speaking about movies professionally for more than two decades.

A veteran of the Sundance, Toronto, and Chicago International Film Festivals, Josh has given talks on film at various colleges and conferences. He has also led “Ebert Interruptus,” a tradition established by Roger Ebert, which analyzes a single film scene by scene over several days at the University of Colorado’s Conference on World Affairs.