Virtual Seminar: The Age of Innocence 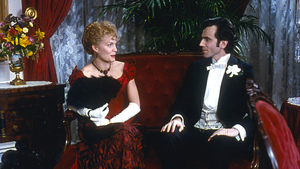 No filmmaker captures the grandeur and energy of New York like Martin Scorsese. With this sumptuous romance, he meticulously adapted the work of another great New York artist, Edith Wharton, bringing to life her tragic novel set in the cloistered world of Gilded Age Manhattan. Swelling with exquisite period detail, The Age of Innocence is an alternately heartbreaking and satirical look at the brutality of old-world America.

Alissa Wilkinson’s work has appeared at Rolling Stone, The Washington Post, Vulture, RogerEbert.com, The Atlantic, Books & Culture, The Los Angeles Review of Books, Paste, Pacific Standard, and others. Alissa is a member of the New York Film Critics Circle and the National Society of Film Critics, and was a 2017-18 Art of Nonfiction writing fellow with the Sundance Institute. Before joining Vox in 2016, she was the chief film critic at Christianity Today.