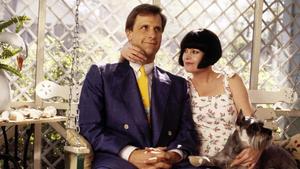 A straitlaced businessman meets a quirky, free-spirited woman at a downtown New York greasy spoon. Her offer of a ride back to his office results in a lunchtime motel rendezvous—just the beginning of a capricious interstate road trip that brings the two face-to-face with their hidden selves. Featuring a killer soundtrack and electric performances from Jeff Daniels, Melanie Griffith, and Ray Liotta, Something Wild, directed by oddball American auteur Jonathan Demme, is both a kinky comic thriller and a radiantly off-kilter love story.

Vikram Murthi is a freelance film critic currently based out of Brooklyn. His work regularly appears in The A.V. Club, The Nation, Filmmaker Magazine, Vulture, and other esteemed publications. He is still very much for hire.