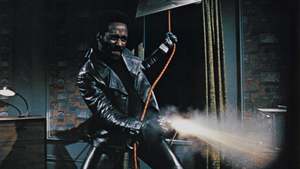 "Hotter than Bond. Cooler than Bullitt," movie posters proclaimed. John Shaft was indeed a shut-your-mouth detective to reckon with, a fact emphasized from the film's start by Isaac Hayes' Academy Award-winning Best Original Song and Oscar-nominated score. Richard Roundtree plays the smart, tough, confident lead, a private investigator whose hunt for a kidnapped woman puts him in the middle of feuding syndicates. Gordan Parks directs from a screenplay that Ernest Tidyman (that same year's Oscar-winner for The French Connection) co-scripted from his own novel. John Shaft is an icon of change from an era of change. Today, Shaft still tells it like it is.

Odie Henderson is a film critic at RogerEbert.com. He has also written for Slate, Vulture, The Village Voice, Slant Magazine, Cineaste and other outlets. He is based in the NYC area.