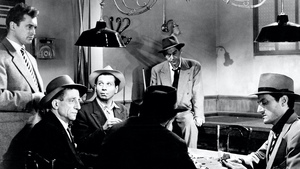 Tony le Stéphanois (Jean Servais), back from prison after taking a rap for Jo le Suédois (Carl Möhner), is ready to settle a few scores and mastermind a brilliant jewel heist. A worldwide smash hit, Rififi earned director Jules Dassin the Best Director prize at Cannes and set the standard for screen robberies for decades to come.

Ty Burr is the Boston Globe’s film critic and cultural columnist. He has been at the paper since 2002. Prior to that, he wrote for Entertainment Weekly and programmed movies for Home Box Office. Burr is the author of Gods Like Us: On Movie Stardom and Modern Fame (2012), The Best Old Movies for Families (2007), and the e-book The 50 Movie Starter Kit: What You Need to Know if You Want to Know What You’re Talking About (2012). He is a member of the National Society of Film Critics and the Boston Society of Film Critics. In 2017, he was a finalist for the Pulitzer Prize in Criticism.