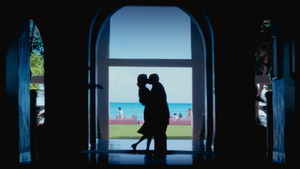 Chaos lurks in every corner of this giddily off-kilter foray into romantic comedy by Paul Thomas Anderson. Struggling to cope with his erratic temper, novelty-toilet-plunger salesman Barry Egan (Adam Sandler, demonstrating remarkable versatility in his first dramatic role) spends his days collecting frequent-flyer-mile coupons and dodging the insults of his seven sisters. The promise of a new life emerges when Barry inadvertently attracts the affection of a mysterious woman named Lena (Emily Watson), but their budding relationship is threatened when he falls prey to the swindling operator of a phone sex line and her deranged boss (played with maniacal brio by Philip Seymour Hoffman). Fueled by the careening momentum of a baroque-futurist score by Jon Brion, the Cannes-award-winning Punch-Drunk Love channels the spirit of classic Hollywood and the whimsy of Jacques Tati into an idiosyncratic ode to the delirium of new romance.

Ethan Warren is a senior editor with the online film journal Bright Wall/Dark Room. He is currently writing his first book, The Cinema of Paul Thomas Anderson, under contract with Columbia University Press.