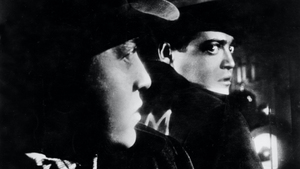 A simple, haunting musical phrase whistled offscreen tells us that a young girl will be killed. “Who Is the Murderer?” pleads a nearby placard as serial killer Hans Beckert (Peter Lorre) closes in on little Elsie Beckmann . . . In his harrowing masterwork M, Fritz Lang merges trenchant social commentary with chilling suspense, creating a panorama of private madness and public hysteria that to this day remains the blueprint for the psychological thriller.

Farran Smith Nehme has written about film and film history for the New York Post, Barron’s, the Wall Street Journal, Film Comment, the Village Voice, Sight & Sound, and the Criterion Collection, as well as for her blog, Self-Styled Siren. Her novel, Missing Reels, was published in 2014.