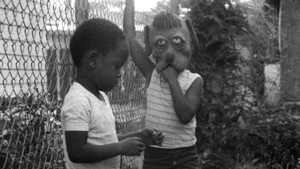 Killer of Sheep examines the Watts neighborhood of Los Angeles in the mid-1970s through the eyes of Stan, a sensitive dreamer who is growing detached and numb from the psychic toll of working at a slaughterhouse. Frustrated by money problems, he finds respite in moments of simple beauty: the warmth of a coffee cup against his cheek, slow dancing with his wife in the living room, holding his daughter. The film offers no solutions; it merely presents life — sometimes hauntingly bleak, sometimes filled with transcendent joy and gentle humor.

Killer of Sheep was shot on location in Watts in a series of weekends on a budget of less than $10,000, most of which was grant money. Finished in 1977 and shown sporadically, its reputation grew and grew until it won a prize at the 1981 Berlin International Film Festival. Since then, the Library of Congress has declared it a national treasure as one of the first fifty on the National Film Registry and the National Society of Film Critics selected it as one of the "100 Essential Films" of all time.

Robert Daniels is a freelance film critic based in Chicago who holds an MA in English. He’s the founder of 812filmreviews, and has written for RogerEbert.com, Polygon, ThePlaylist, Consequence of Sound, and Vulture. He is a member of AAFCA (African-American Film Critics Association) and can always be found in a coffee shop, pandemic permitting.