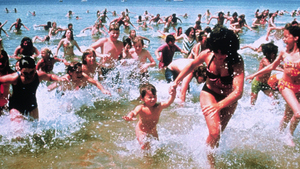 When a leviathan of a Great White begins making snacks out of the good people of Amity Island, it's up to Police Chief Brody (Roy Scheider), grizzled fisherman Quint (Robert Shaw), and marine biologist Hooper (Richard Dreyfuss) to embark on one of the greatest fish stories ever told.

John Campopiano is a New England archivist, filmmaker, and writer. He is the Archives & Rights Manager for PBS FRONTLINE and has written and produced independent documentaries including Unearthed & Untold: The Path to Pet Sematary (2017) and the two upcoming documentaries, Pennywise: The Story of IT and Snapper: The Man Eating Turtle Movie That Never Got Made. His writing on horror films and pop culture has been published in Delirium Magazine, Diabolique Magazine, Rue Morgue, Bloody Disgusting, iHorror, Dread Central, Mashable, The Wrap, MovieMaker Magazine, Scream Magazine, and Fangoria.

David's humble beginnings at 5 years old started when he appeared in Jaws as an extra during the Alex Kintner beach attack scene. His experience began his love of cinema and carried through to the present. He is currently an Online Editor and Colorist with WGBH. He's in the midst of producing a live action docudrama about the struggle to make Jaws in 1974 for television called "Making The Monster" and is the co-creator of the Ultimate Jaws Location Guide recently released on Google Earth for Jaws fans around the world.