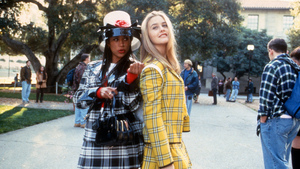 This summer, Amy Heckerling's Clueless celebrates its 25th anniversary. Like Cher Horowitz might say, "As If!" Yet somehow it's true—Clueless originally hit theaters on July 19, 1995. Since then, the movie has been adapted for television, and Heckerling most recently turned it into a musical. We'll take a look at where the film came from, some of the reasons that it remains so popular twenty-five years later, and how that rockin' soundtrack came together.

Audrey J. Golden is Assistant Professor of English at Simmons University, where she teaches courses in global literature and postcolonial cinema. Her love of film dates to her time as head projectionist of the Wesleyan University cinema, where she also earned a B.A. in film studies. She earned a J.D. from Wake Forest University School of Law and a Ph.D. from the University of Virginia. As a lawyer and literature scholar, her research focuses on the connections between international human rights law and postcolonial fiction. She regularly teaches and writes on literature and film from the late twentieth and early twenty-first centuries.