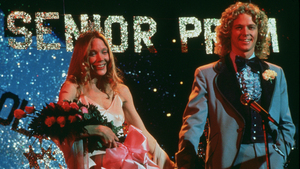 For Carrie White (Sissy Spacek), what begins in blood ends in blood. Brian De Palma (Dressed To Kill, Scarface) takes Stephen King's first novel and creates one of the most harrowing high school films ever.

Carrie's mother, Margaret (Piper Laurie), is a domineering evangelical who beats and abuses her daughter in the name of purity, grace, and innocence. After her first period, strange things begin to happen when Carrie gets mad, and no bible-thumping matriarch is going to be a match for Carrie's newfound telekinetic powers...nor are the bullies that populate her school, for that matter.

Katie Walsh is a Los Angeles-based film critic, journalist, podcast host, and moderator. She reviews weekly film releases for the Tribune News Service, and the Los Angeles Times, and is a frequent guest host of the Maximum Fun podcast Switchblade Sisters. Her writing has been published in Vanity Fair, Rolling Stone, Playboy, MEL Magazine, The Playlist, Nerdist, Slate, indieWIRE, Women and Hollywood, and more.