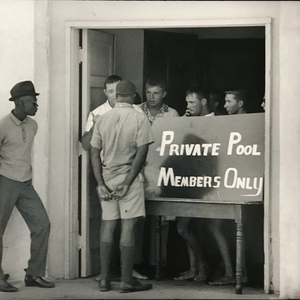 SNCC (2020), the latest film by legendary photographer, writer, and filmmaker Danny Lyon, brings together never-before-seen photographs made by Lyon as the staff photographer for the Student Nonviolent Coordinating Committee, or SNCC.

The film begins in 1962, when Lyon, then a University of Chicago student, met John Lewis, a Freedom Rider, activist, and eventual U.S. Congressman, and traces the story of the ongoing struggle for civil rights in the United States, as well as the enduring friendship between Lyon and Lewis. Lyon's images are layered with archival audio recordings of speeches by and conversations with Lewis, Julian Bond, and Dotty Zellner, among others, and recently discovered freedom songs recorded by Alan Ribback in 1960s.

Registration is required to receive a link to the film, you can stream the film anytime between November 15 through November 21. This week-long screening coincides with a public conversation with Danny Lyon at 7 PM on Wednesday, November 17, hosted by Brandeis University and Waltham High School students.

Danny Lyon (b. 1942, Brooklyn, NY) is a photojournalist, writer, and filmmaker. His willingness to push the boundaries of traditional journalism and fully immerse himself within the lives of his subjects has resulted in some of the most iconic photographs from the civil rights movement and powerful images of marginalized groups across the United States.

Lyon received a B.A. in History from the University of Chicago in 1963. Soon after graduating, he joined the Student Non-Violent Coordinating Committee (SNCC), serving as the staff photographer. During the late 1960s and 1970s, Lyon also documented his time traveling with a motorcycle club, the Chicago Outlaws—photographs that were published in his book The Bikeriders (1965). Images from his 14 months of photographing a Texas penitentiary system were compiled into the important book Conversations with the Dead (1971), which included voices and ephemera from inmates.

Lyon has published numerous additional photographic books and produced many films. The recipient of a Guggenheim Fellowship, his work has been included in many major exhibitions, including the 2016 retrospective Danny Lyon: A Message to the Future (Whitney Museum of American Art, New York).


This program is co-sponsored by our partners at Brandeis University: the Fine Arts Department, the Department of African and African American Studies, and the Creativity, the Arts, and Social Transformation Program.