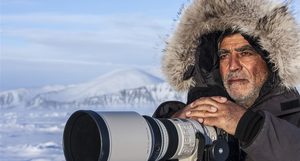 Boston Jewish Film is proud to present a virtual screening of Picture of His Life. The film will be available to rent and watch from June 11-14.

To photograph some of the most fearsome creatures on Earth, Amos Nachoum has gone face to face with anacondas, giant leopard seals, great white sharks, orcas, and crocodiles. But at age 65, Nachoum, one of the greatest underwater photographers of all time, is about to face his ultimate challenge: photographing a polar bear, up close, without any protection. As he prepares for his biggest mission in the Canadian Arctic, Nachoum faces past traumas in an intimate story of dedication, sacrifice, and personal redemption.

Join Boston Jewish Film on June 14 at 5pm for a conversation with co-director Yonatan Nir. Nir is the director of My Hero Brother and Dolphin Boy. He will be talking about his experience meeting Amos Nachoum and following him through his incredible journey into the arctic.