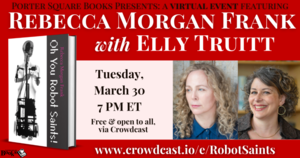 Please join Porter Square Books for a reading and talk with Rebecca Morgan Frank, author of the new collection Oh You Robot Saints! She will be joined in conversation by Elly Truitt, author of Medieval Robots: Mechanism, Magic, Nature, and Art. This event is free and open to all, hosted on Crowdcast.

Part bestiary, part litany, part elegy, Rebecca Morgan Frank’s Oh You Robot Saints! is populated by a strange menagerie of early automata and robots, including octobots and an eighteenth-century digesting duck, set alongside medieval mechanical virgins and robot priests. From a riveting robobee sonnet sequence that links weapons of war and industrial fixes for infertility to a microdrama sketching out a missing Sophocles play on the mythical bronze man, Talos, these muscular poems blur and sing the lines between machines and the divine. This lyrical exploration of the ongoing human desire to create life navigates wonder and grief, joining the uncanny investigation of what it is to be, to make, and to be made.

Rebecca Morgan Frank is the author of three previous books of poems: Sometimes We’re All Living in a Foreign Country and The Spokes of Venus, both from Carnegie Mellon University Press, and Little Murders Everywhere (Salmon Poetry), a finalist for the Kate Tufts Discovery Aware. Her poems have appeared in The New Yorker, American Poetry Review, The Kenyon Review, and elsewhere. She lives in Chicago.

Elly R. Truitt is an Associate Professor in the History and Sociology of Science Department at the University of Pennsylvania. She studies the circulation of scientific objects and natural knowledge throughout central and western Eurasia and north Africa, from antiquity into the early modern period. She has a particular interest in how scientific ideas, practices, and objects traveled and were adapted to new settings, and many kinds of sources—visual, material, and textual—inform her work. Her first book, Medieval Robots: Mechanism, Magic, Nature, and Art (Penn, 2015), explored the history of automata in medieval Latin culture, where they were used to pose questions about identity, liveliness, and the ethics of knowledge and creation. She has published academic articles on the history of automata, the history of timekeeping technology, pharmacobotany, the adoption of Arabic terms and ideas into Latin and English scientific texts, and on concepts of artificial intelligence in the Middle Ages, and for a more general audience in Aeon, History Today, and the TLS. Her research has been supported by the National Science Foundation, the Mellon Foundation, the Huntington Library, the Max-Planck-Institute for the History of Science, and other institutions. She is currently working on two books: the first, about how ideas about the medieval period influenced the invention of modern science; and the second, about science in courtly settings across the Mediterranean world, from 750-1250.

Register to join the event on Crowdcast here: https://www.crowdcast.io/e/robotsaints