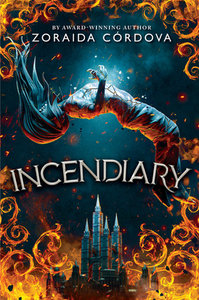 Renata was only a child when she was kidnapped by the King’s Justice and brought to the luxurious palace of Andalucia. As a memory thief, the rarest and most feared of the magical Moria, Renata was used by the crown to carry out the King’s Wrath, a siege that resulted in the deaths of thousands of her own people. When Dez, the commander of her unit-and the boy she’s grown to love-is taken captive by the notorious Príncipe Dorado, Renata must return to Andalucia and complete Dez’s top secret mission herself. Can she keep her cover, even as she burns for vengeance against the brutal, enigmatic prince? Her life and the fate of the Moria depend on it.

Zoraida Córdova is the author of many young adult fantasy novels including Incendiary, Star Wars: A Crash of Fate, the Brooklyn Brujas series, and The Vicious Deep trilogy. Zoraida was born in Ecuador and raised in Queens, New York. When she isn’t working on her next novel, she’s planning a new adventure.

Julie C. Dao is a proud Vietnamese American who was born in Upstate New York. She studied medicine in college, but came to realize blood and needles were her kryptonite. She is the author of Forest of a Thousand Lanterns, Kingdom of the Blazing Phoenix and Song of the Crimson Flower.

Reddit
29/04/2020 21:00:00 29/04/2020 22:00:00 America/New_York Virtual Event: Zoraida Córdova in conversation with Julie C. Dao Watch the event on Brookline Bookmith's <b><a href="https://www.instagram.com/brooklinebooksmith">Instagram page</a></b>. Renata was only a child when she was kidnapped by the King’s Justice and... Instagram via Brookline Booksmith, Boston, MA false DD/MM/YYYY