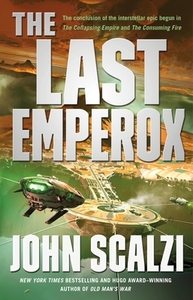 This will be a virtual event on Crowdcast: https://www.crowdcast.io/e/john-scalzi---the-last/register

The collapse of The Flow, the interstellar pathway between the planets of the Interdependency, has accelerated. Entire star systems—and billions of people—are becoming cut off from the rest of human civilization. Emperox Grayland II has finally wrested control of her empire from those who oppose her and who deny the reality of this collapse. But “control” is a slippery thing, and even as Grayland strives to save as many of her people form impoverished isolation, the forces opposing her rule will make a final, desperate push to topple her from her throne and power, by any means necessary. Will Grayland become the savior of her civilization … or the last emperox to wear the crown?

John Scalzi won the 2006 John W. Campbell Award for Best New Writer, the 2013 Hugo Award for Best Novel for Redshirts, and his debut novel Old Man’s War was a finalist for Hugo Award as well. His other books include The Ghost Brigades, The Android’s Dream, The Last Colony and The Human Division. He has won the Romantic Times Reviewers Choice Award for science-fiction, the Seiun, The Kurd Lasswitz and the Geffen awards. His weblog, The Whatever, is one of the most widely-read web sites in modern SF. Born and raised in California, Scalzi studied at the University of Chicago. He lives in southern Ohio with his wife and daughter.

Reddit
14/04/2020 18:00:00 14/04/2020 19:00:00 America/New_York Virtual Event: John Scalzi This will be a virtual event on Crowdcast: https://www.crowdcast.io/e/john-scalzi---the-last/register The Last Emperox is the thrilling conclusion to the award-winning, New York Times and USA To... Crowdcast via Brookline Booksmith, Brookline, MA false DD/MM/YYYY