Virtual: Emma Duffy-Comparone with Andre Dubus III, Love Like That 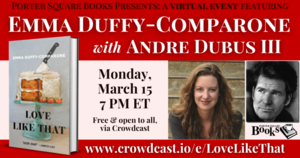 Please join Porter Square Books for a virtual reading with Emma Duffy-Comparone for her debut short story collection, Love Like That -- "a witty, provocative short story collection, filled with women who are delightfully difficult” (Refinery29). She will be joined in conversation by Andre Dubus III. This event is free and open to all, hosted on Crowdcast.

Love Like That is a joyfully subversive and moving debut collection of stories about brilliant, broken women that are just the right amount wrong.

Whether diving into complicated relationships or wrestling with family ties, the girls and women who populate this collection—misfits and misanthropes, bickering sisters, responsible daughters, and unhappy wives—don't always find themselves making the best decisions.

A woman struggles with a new kind of love triangle when she moves in with a divorced dad. A lonely teenage beach attendant finds uneasy comradeship with her boss. A high school English teacher gets pushed to her limits when a student plagiarizes. Often caught between desire and duty, guilt and resentment, these characters discover what it means to get lost in love, and do what it takes to find themselves again.

Utterly singular and wholly unforgettable, Emma Duffy-Comparone's stories manage to be slyly, wickedly funny at even their darkest turns and herald the arrival of an irreverent and dazzling new voice.

Emma Duffy-Comparone’s fiction has appeared in Ploughshares, New England Review, One Story, AGNI, The Sun, The Pushcart Prize XXXIX & XLI, and elsewhere. A recipient of awards from the Bread Loaf and Sewanee Writers’ Conferences, the MacDowell Colony, the Yaddo Corporation, and the Elizabeth George Foundation, she is an assistant professor of creative writing at Merrimack College. Love Like That is her first published book.

Andre Dubus III is the author of The Cage Keeper and Other Stories, Bluesman, and the New York Times bestsellers, House of Sand and Fog, The Garden of Last Days (soon to be a major motion picture) and his memoir, Townie, a #4 New York Times bestseller and a New York Times "Editors Choice". His work has been included in The Best American Essays and The Best Spiritual Writing anthologies, and his novel, House of Sand and Fog was a finalist for the National Book Award, a #1 New York Times Bestseller, and was made into an Academy Award-nominated film starring Ben Kingsley and Jennifer Connelly. His novella collection, Dirty Love, was published in the fall of 2013 and was listed as a “Notable Book” by The Washington Post and The New York Times, and was named a New York Times Editors’Choice”, and a Kirkus “Starred Best Book of 2013”. His latest novel, Gone So Long, published in October 2018, has received starred reviews from Publisher’s Weekly and Library Journal and has been named on many “Best Books” lists, including selection for The Boston Globe’s “Twenty Best Books of 2018” and “The Best Books of 2018”, “Top 100”, Amazon. Mr. Dubus has been awarded a Guggenheim Fellowship, The National Magazine Award for Fiction, Two Pushcart Prizes, and an American Academy of Arts and Letters Award in Literature. His books are published in over twenty-five languages, and he teaches full-time at the University of Massachusetts Lowell. He lives in Massachusetts with his wife, Fontaine, a modern dancer, and their three children.