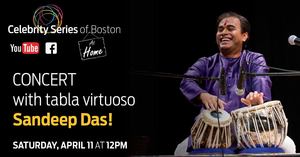 Save the date for our next “Celebrity Series at Home” concert with tabla virtuoso Sandeep Das on Saturday, April 11 at 12pm ET. A Grammy award-winner with Silkroad and a Guggenheim Foundation Fellow, Sandeep is hailed as one of the world's top tabla maestros in the world.

Learn more about Sandeep at https://www.sandeepdas.com/

A 2019 Guggenheim Foundation Fellow, Sandeep Das is one of the leading Tabla players in the world today. Having established himself as India’s top Tabla maestro, he has also built a prolific international reputation. He is one of the unique Indian classical musicians who has collaborated, performed with, and composed for major symphony orchestras, string quartets, and jazz musicians with regularly featured concerts at Carnegie Hall, Lincoln Center, Hollywood Bowl, Royal Albert Hall and the Concertgebouw, to name a few.​

He has performed at major events such as the 150th annual celebration of the United Nations at the General Assembly Hall in NYC, opening ceremony of the Special Olympics in Shanghai, opening ceremony of the 1st Asia Expo in Kunming, China, World Economic Forum, the BBC Proms, and for visiting dignitaries like the Queen of England, Queen of Thailand, the Pope and various other visiting country heads. His collaboration with Yo-Yo Ma and the Silk Road Ensemble (SRE) for “Sing Me Home” won the 2017 Grammy Award for the Best World Music album. He has had two previous Grammy nominations in 2005 and 2009. In 2017 he received the prestigious Brother Thomas Fellowship and New England Choice Artist of the Year award, and in 2018, he received a Live Arts Boston grant from the Boston Foundation.

Reddit
11/04/2020 12:00:00 11/04/2020 12:30:00 America/New_York Virtual Concert with Sandeep Das, tabla virtuoso Save the date for our next “Celebrity Series at Home” concert with tabla virtuoso Sandeep Das on Saturday, April 11 at 12pm ET. A Grammy award-winner with Silkroad and a Guggenheim Foundation Fello... Facebook + YouTube Live via Celebrity Series of Boston, Boston, MA false DD/MM/YYYY