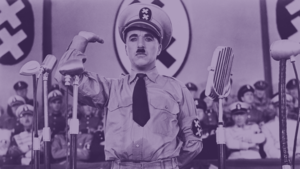 Simmons University professor Audrey Golden leads our first virtual Coolidge Education class, exploring how cinema, across time and global space, can have political power in the face of tyranny.

During the last hundred years, cinema has been used to resist fascism and to offer filmmakers and audiences a means to oppose authoritarian violence—often in surprising ways. From the early 1940s to the late 2010s, directors have relied on humor as a means of engaging with, and rebelling against, political forces. Although the act of moviegoing—particularly to comedies—certainly has functioned as a getaway from the lulls and pains of everyday life since the start of the twentieth century, the theatre has also been a site in which resistance can emerge.

When it comes to depicting dictatorship on film, Charlie Chaplin was among the first to imagine comedy as a genre through which to fight authoritarianism. We’ll start with Chaplin’s The Great Dictator (1940), and then we’ll move onto Ernst Lubitsch’s To Be or Not to Be (1942). In these first two classes, we’ll focus on films that arose in direct response to the rise of Nazism in Europe. Then, we’ll turn to the twenty-first century with Armando Iannuci’s The Death of Stalin (2017) and Taika Waititi’s Jojo Rabbit (2019) in the weeks that follow. In those latter meetings, we’ll investigate how contemporary directors have returned to dictatorships of the past in order to engage with the present.

Throughout the course, we’ll also spend time learning about works of cinema that reimagine, reinvent, and resist the Pinochet dictatorship in Chile, Idi Amin’s rise to power in Uganda, the violence of Putin’s Russia, and the continued threat of totalitarianism in North Korea.

The $60 registration fee gets you access to all four 90-minute live Zoom discussion sessions, all four pre-recorded lectures, as well as recordings of the discussions if you have to miss a week.

However, the registration fee does not include access to any of the films being covered in the class—you should budget in anywhere from $15-30 to spend on film rentals, varying based on film availability and which streaming services you subscribe to.