Virgin Territory: Everything you always wanted to know about olive oil, but were afraid to ask with Nancy Harmon Jenkins 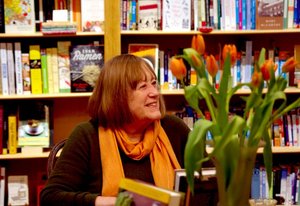 Nancy Harmon Jenkins, considered one of the leading authorities on extra-virgin olive oil, Mediterranean cuisines, and the Mediterranean diet and its consequences for good health, will be the featured speaker at the Culinary Guild of New England’s virtual opening meeting on Monday, September 21, at 7:30 PM. Her talk, “Virgin Territory: Everything you always wanted to know about olive oil, but were afraid to ask!” will cover how olive oil is made, why it's so expensive, why it's fundamental to any great Mediterranean cooking, why it helps maintain a healthy lifestyle (and resistance to the other bugs), and how to choose it and use it. The meeting is open to the public; the admission fee can be applied toward a Culinary Guild membership for 2020-21.

The Camden, Maine-based Jenkins is the author of nine cookbooks, the most recent of which include Virgin Territory: Exploring the World of Olive Oil and The Four Seasons of Pasta, a collaboration with her daughter Sara Jenkins, the acclaimed former chef/owner of New York City’s Porchetta and Porsena, who now runs the Mediterranean-focused Nina June in Rockport, Maine (and who got her kitchen start at Todd English’s Figs). Nancy has also contributed to four other books about cooking and has authored numerous newspaper and magazine articles, in addition to being a commentator about food on television and radio.

Before launching a free-lance career in the 1990s, Nancy was a staff writer at The New York Times and later served as publications director of the American Institute of Wine & Food. The Wellesley College graduate is also a founding director of the Cambridge-based Oldways Preservation and Exchange Trust, a nonproﬁt that helps people rediscover and embrace the healthy, sustainable joys of the “old ways” of shared cultural food traditions.

Founded in 1979 by a handful of female culinary professionals (mostly from the Boston area), including such luminaries as cookbook author Lora Brody, former Boston Globe food editor and current contributor Sheryl Julian, Maison Robert owner Ann Robert, and Julia Child’s producer Ruth Lockwood, during a time that support for women in the culinary field was severely lacking, members of the volunteer-run Culinary Guild of New England today are just as likely to be anyone from passionate home cooks and bakers and those with a curiosity about food to professional bakers, chocolatiers, caterers, and restauranteurs, food marketing consultants, farmers, and cheesemakers.

Admission to the event is free for Culinary Guild members and $10 for non-members, which can be applied toward the “Guild’s” $75 annual membership fee if joining the organization within two weeks of the event. Membership includes generous discounts from the organization’s culinary business partners, invitations to all Guild events, bi-monthly e-newsletters, and access to the member directory. Non-members can reserve a spot at https://bit.ly/3lMTtYO, or join the Culinary Guild directly at https://www.culinaryguild.org/new-member-application/.

Reddit
21/09/2020 19:30:00 21/09/2020 21:00:00 America/New_York Virgin Territory: Everything you always wanted to know about olive oil, but were afraid to ask with Nancy Harmon Jenkins Nancy Harmon Jenkins, considered one of the leading authorities on extra-virgin olive oil, Mediterranean cuisines, and the Mediterranean diet and its consequences for good health, will be the featu... Online via Zoom (link to be shared just prior to event), Boston, MA false DD/MM/YYYY