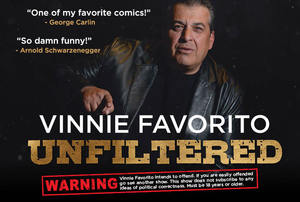 BACK FROM VEGAS OCT 14th ONLY (2 Shows)
Known for his comedy roasts of such celebs as Tom Arnold, Magic Johnson, Pat O'Brien and even Larry King, Vinnie Favorito has a unique style of comedy. Scripted material just isn't a priority for this Boston-born comic who earned his stripes at the Improv and the Comedy Store in Los Angeles. Headlining Vegas since 2003, Vinnie has been performing in comedy clubs and on TV for more than 20 years.

"One of my favorite comics!" - George Carlin

If you're looking for safe and politically correct humor, then this off the cuff funny show probably isn't for you ... but if you want some edgy and raw unfiltered comedy with bite, Vinnie just might become your new Favorito.

Boston's Gary Marino of the World Gone Crazy Comedy Band opens the show.
WARNING: Vinnie Favorito intends to offend. If you are easily offended, go see another show. Must be 18 years or older to attend.

Rasta Pasta Pizzeria will sell their Fresh Made Pizza and more during this show!